The NBS has recently launched its fourth National BIM (Building Information Modelling) Report for the year ending early 2014. Covering 1000 respondents from the construction industry it gives a very good indication of how well the industry is aware of BIM and how far it has progressed towards full adoption.

The government target of making BIM mandatory for all public sector building projects by 2016 has certainly focussed minds, with 93% of respondents predicting they will be using BIM in 3 years time (ie 2016, for those surveyed in 2013). Current users of BIM in the survey was 54% of respondents, so this will be close to double the amount of 2013 BIM users by 2016. 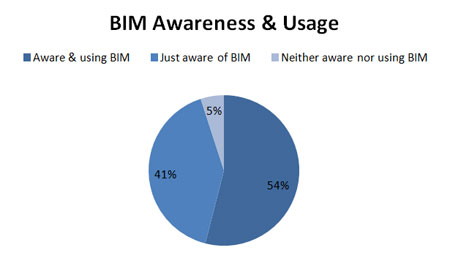 It is interesting to look at that growth figure and compare it with another question that asked “I trust what I hear about BIM” – only 27% of the survey agreed with this, with 31% disagreeing and the remainder being ambivalent about the issue. The cost of the up-front investment in BIM can be substantial and when the government is in effect demanding the investment for all private sector businesses that want to be involved in public sector building projects (in a very tight timescale), then perhaps some cynicism is understandable.

To get some clarity on this, the survey asked if the construction industry was “clear enough on what BIM is yet?”, to which 73% replied “not clear”. Another cause of cynicism was raised by smaller practices that that BIM was just another cost barrier that would prevent them being involved in larger projects and was likely to inhibit their future growth. Of the smaller practices a full 67% cited costs as a barrier to BIM adoption.

Of course there are different levels to BIM, running from 0 to 3, with 3 being the most advanced. The level aimed for by the Government for the 2016 target is level 2. In the survey only 58% of respondents had worked at level 2 or above (7% were at level 3). This leaves 42% that need to invest in technology and training in the next two years, but more than half of this remainder are not aware there are different levels of BIM.

Although it is clear the industry overall is moving in the right direction, with adoption of BIM up from 31% in 2010 to 54% in 2013, there is clearly some feet dragging along the way. This is despite 70% of the current adopters saying that BIM has given them a competitive advantage – an advantage that might just grow when they can demonstrate years of experience when the issue becomes more critical. However, it is clear that these advantages are really only visible to the early adopters. Like climbing a hill, you can only really appreciate the view when you get to the top – on the way up it is just a slog.

Certainly from an AMP Consultants perspective, the adoption of BIM has been a very worthwhile investment and has brought clear benefits to both our clients and our own business.

This is a fascinating report that covers the issue very comprehensively and steps beyond the facts and figures to give a full appreciation of exactly where we are on the journey to making BIM an industry norm rather than an aspiration.

The report is available from the NBS website here: NBS National BIM Report 2014.